East Frederick is comprised of roughly 2,000 acres on the east side of downtown Frederick. A traditional manufacturing and industrial area, East Frederick represents a long-term opportunity for redevelopment, reuse, and infill development.

In 2011, after a series of community meetings and outreach to the property owners, residents, and business in the area, the East Frederick Rising Small Area Plan was adopted by the mayor and Board of Aldermen. This plan provides a vision and framework for redevelopment over the next 30 years. 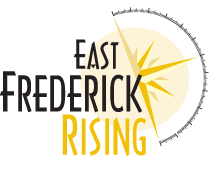 A community-based group, with support from the City of Frederick, formed East Frederick Rising - a 501(c)3 organization founded to provide programs, offer services, and engage in other activities that promote and support the east side of Frederick.